Where to eat in London if you’re vegan

Where to eat in London if you’re vegan

London is one of the world’s most vegan-friendly cities. Here are our favourite places to grab some plant-based grub 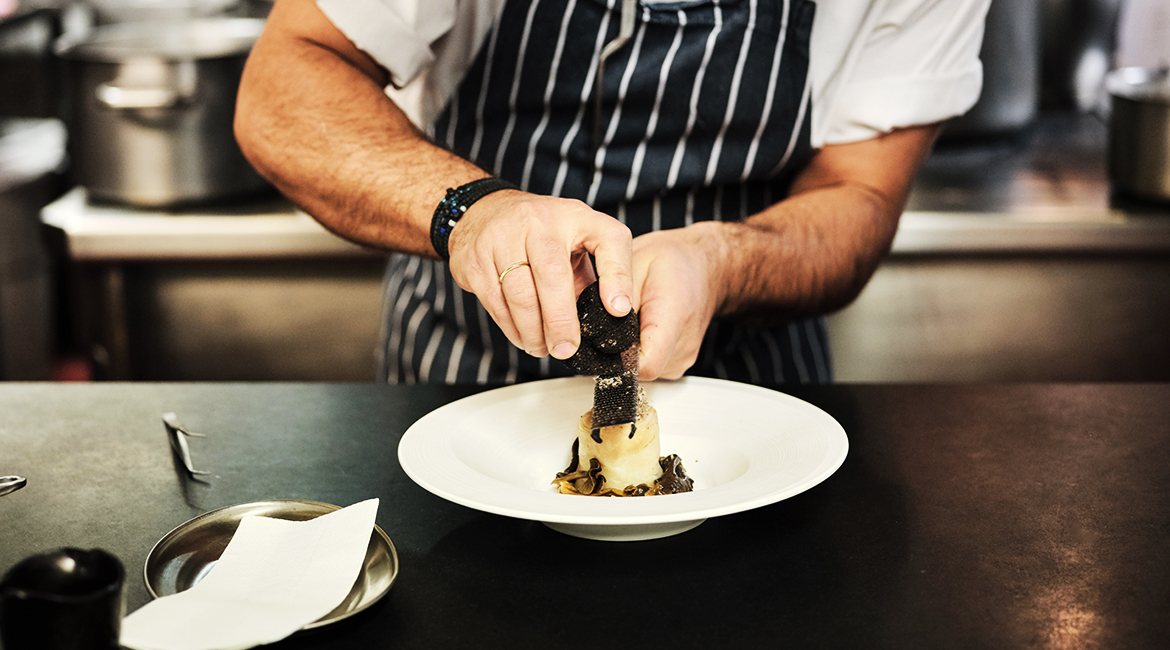 It's all about fancy vegan fare at Pied à Terre / Image: Liz Seabrook 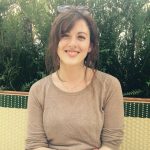 Florence is a travel writer and author of London Like a Local, a DK Travel guidebook. She contributes to Culture Trip, Conde Nast Traveller, and more.

For the country with the most livestock in Africa, Ethiopia boasts curiously vegan-friendly cuisine. But it’s long been customary for Orthodox Tewahedo Christians to omit meat from their diet on Wednesdays and Fridays – something that the West cottoned onto in recent decades, with campaigns such as Paul, Mary and Stella McCartney’s Meat Free Monday.

London is one of the world’s most vegan-friendly cities, even being voted number one several times by online vegan restaurant guide HappyCow. Today it has more than 200 vegan restaurants, and more vegan spots than vegetarian ones. We’ve picked our favourites from the masses. 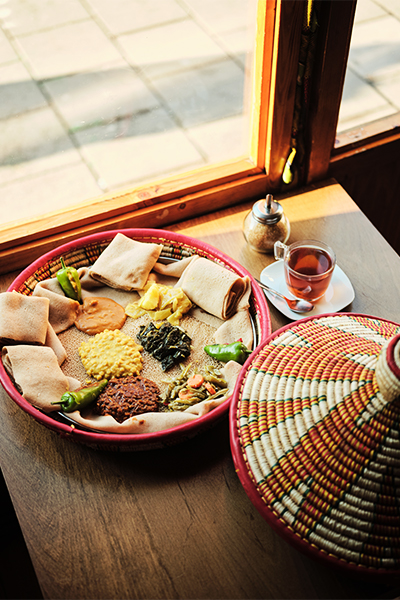 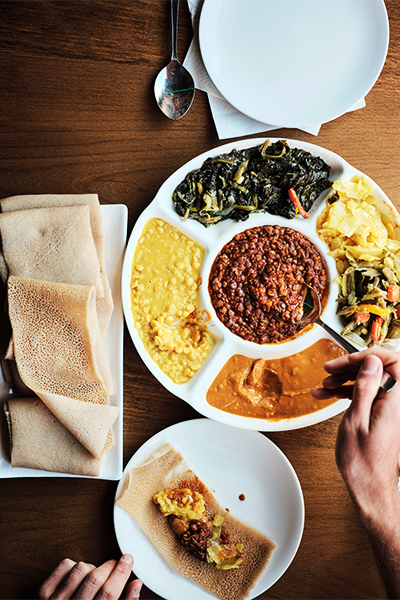 Any Londoner will point you in the direction of Dalston for plant-based grub. The east London district’s main thoroughfare, Kingsland Road, is packed with veg-centric diners from a deep-fried jackfruit joint to an outpost of beloved Soho spot Mildreds.

But there’s one unassuming, cash-only canteen that set up shop here long before vegan eating became a hipster trend. “I came to London from Addis Ababa in 1970, and the city was missing Ethiopian food,” says Andu Cafe’s owner, Andu Alam. “We opened the UK’s first vegan Ethiopian restaurant. At first it wasn’t that busy, but since vegan food has taken off, it has gained popularity. Now people come from all over the UK and beyond.”

It’s easy to see why. Sitting at a wicker chair, surrounded by carved wooden figurines and faded photos on the lime-green walls, feels like being in a friend’s living room.

And the food couldn’t get any homelier: brought out quickly on platters bearing six dishes each, it’s a warming antidote to the harsh winter outside. Alam’s yemisir wot (lentil stew) is his crowning glory. Smoky, oily and rich in tomato, it’s got just enough of a kick to ward off a cold, and its smooth texture complements the crunch of the accompanying cabbage and beans. It’s all mopped up with a tangy injera flatbread and followed by jebena-served coffee to keep you warm for the rest of the night. 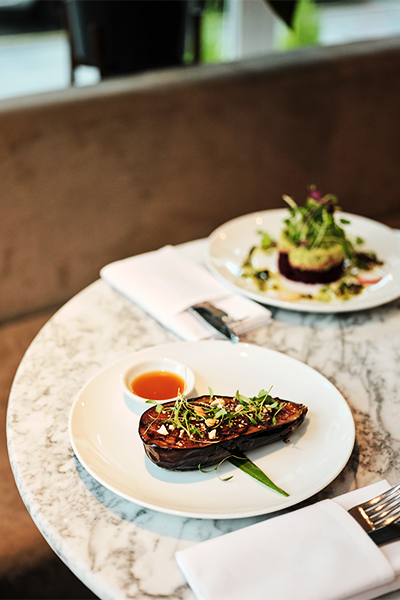 We've got an aubergine emoji for this aubergine dish / Image: Liz Seabrook 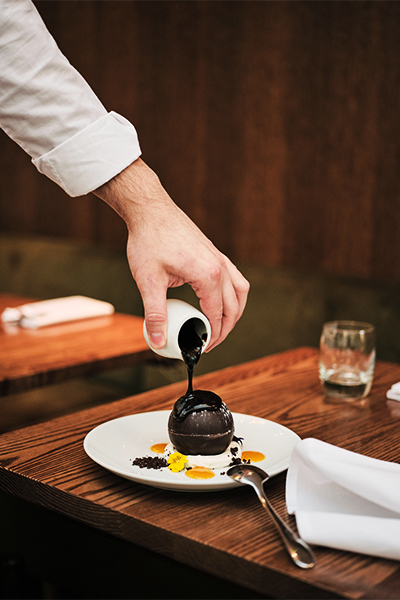 A vegan chocolate extravaganza at The Gate / Image: Liz Seabrook

The veggie pioneer: The Gate

Red buses trundle past the ceiling-high windows of the bright dining room, where a shiny, glazed aubergine waits on a polished wooden table. Sliced in half, it drips with a sticky sauce of miso paste, sugar and soy. The knife slides smoothly through its roasted flesh and each bite crunches with a garnish of toasted cashew nuts and sesame seeds.

At vegetarian fine-dining spot The Gate – which launched in Hammersmith in 1989 and was followed by three more London openings – aubergine replaces meat. “Another of our classic Gate dishes is aubergine ‘schnitzel’,” says owner Michael Daniel. “But although we live in a world where everything gets compared to meat, vegetarian ‘meatballs’ are not meatballs – they’re lentil balls, or something different.”

“Nowadays, we see people in the restaurant we wouldn’t expect – groups of guys, and people who are open to just trying vegan once in a while.” 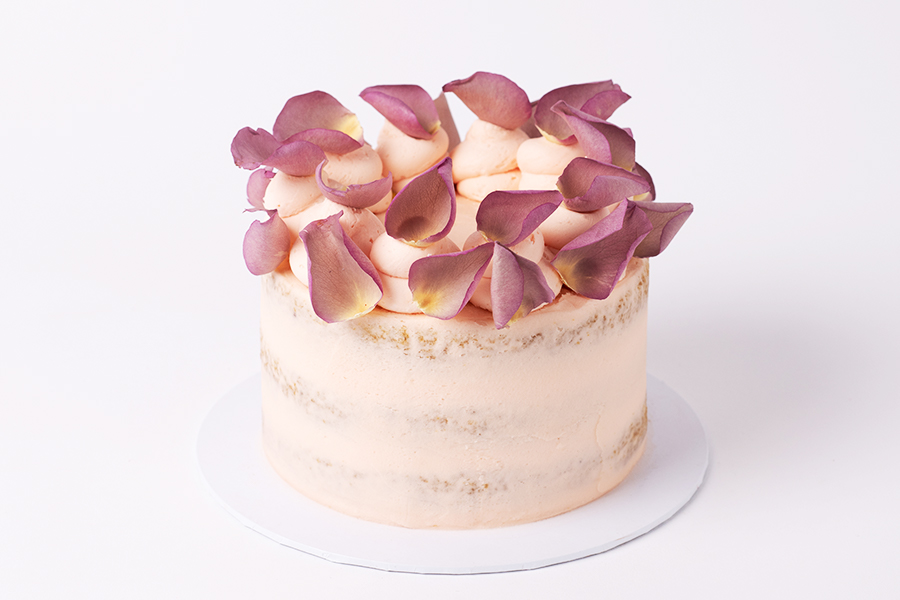 The one for dessert: Ruby's of London

Vegan cakes get a bad rap: traditional bakers have long complained that replacing eggs and butter with coconut oil and soy milk leads to heavy, dry results. Those prejudices can be left at the door of Ruby’s, which arrived at Greenwich Market back in 2010, serving the most un-vegan-tasting vegan cakes on the market.

Their sweet success is evident, with Ruby’s cakes and bakes on sale in Harrods and Selfridges, as well as in two of her very own brick-and-mortar bakeries: one in Tunbridge Wells and another in London’s Greenwich, back where it all began. 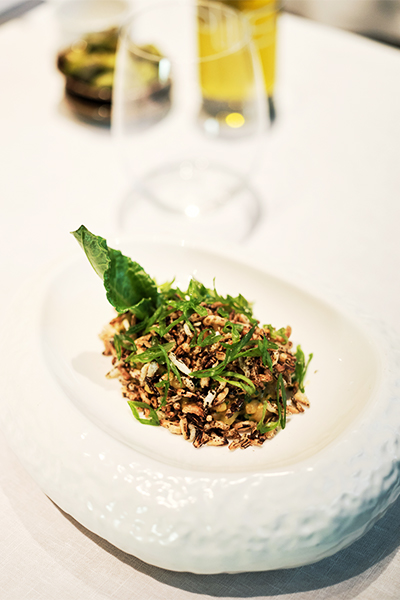 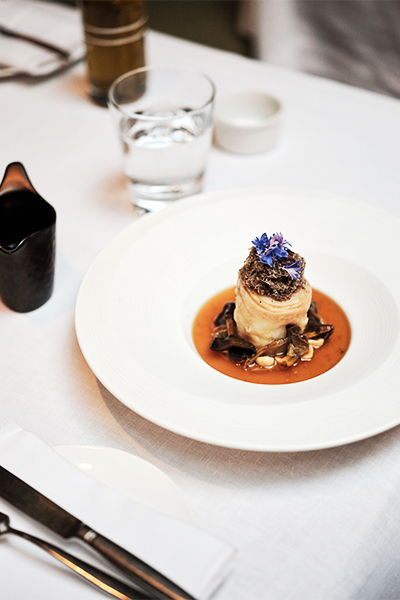 In Fitzrovia, the restaurant-packed pocket just north of Oxford Street, the roster of food businesses is in near-constant flux.

But Pied à Terre is not only one of the area’s longest-standing restaurants, it also boasts one of London’s longest-held Michelin stars, awarded in 1993, two years after opening. Thanks to founder David Moore’s determination to be ahead of the curve, you can forget the starched tablecloths and haughty staff usually associated with Michelin-starred dining rooms. Here, pendant lamps cast dappled light over leather booths and teal velvet chairs.

The delicate tasters of spelt risotto, coconut cream “cheese” and zesty lime sorbet are a far cry from the meat-focused kitchen of the 90s, where the chefs would scrabble to find a plant-based alternative on the fly. “Nowadays, out of 45 covers, 20 of them could be on the vegan menu,” says Moore.

“Over the next five or 10 years we are all going to eat much less meat. It’ll be like when we stopped smoking on buses or planes. Your kids will say to you, ‘Did you really eat meat twice a day?’”