The mightiest waterfalls in Ethiopia

The mightiest waterfalls in Ethiopia

Five fantastic falls worth gushing about 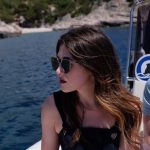 From the otherworldly Danakil Depression and Erta Ale lava lakes, to the 15.1km-long Sof Omar Cave, Ethiopia is a country replete with natural wonders. It’s also rich in water reserves, home to 12 big lakes and nine major rivers, and originates 86% of the Nile River’s flow. Little wonder, then, that some of Ethiopia’s most admired phenomena are its waterfalls. You can find impressive cascades up and down the country, but here are the five we’ve totally fallen for. 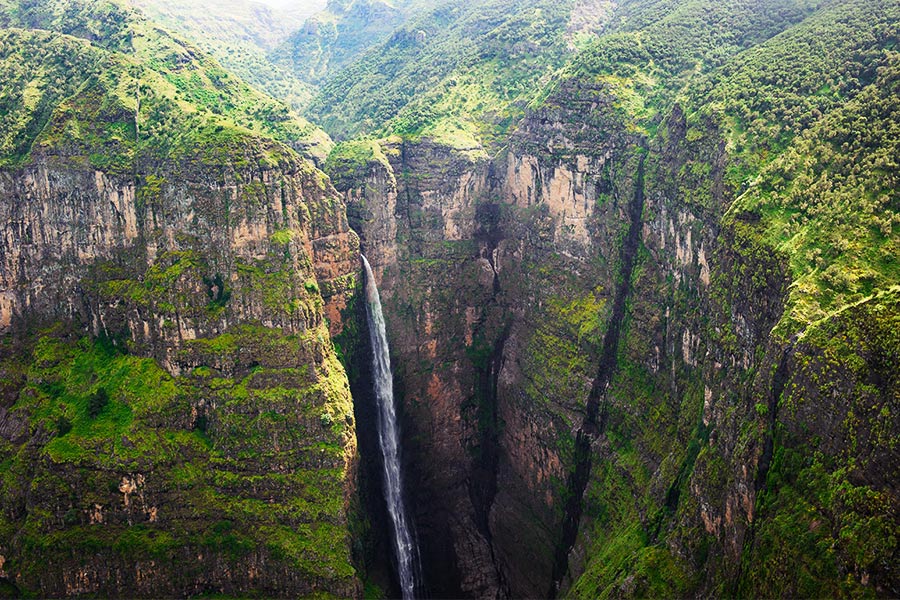 Located in the Simien Mountains in northern Ethiopia, Jinbar is a striking scene. The single cascade plummets near-vertically an estimated 800 metres into the canyon-like Geech Abyss. Although the volume of water can vary between seasons, the precipitous terrain of the Simien’s plateaus sustains it well. Unlike other waterfalls, it’s always something to behold – though naturally, the wetter months are when it’s at its most powerful.

Keen hikers can take a closer look while exploring the national park. Less-hardcore walkers can access it by car via a nearby unpaved road, plus a 15-minute stroll. 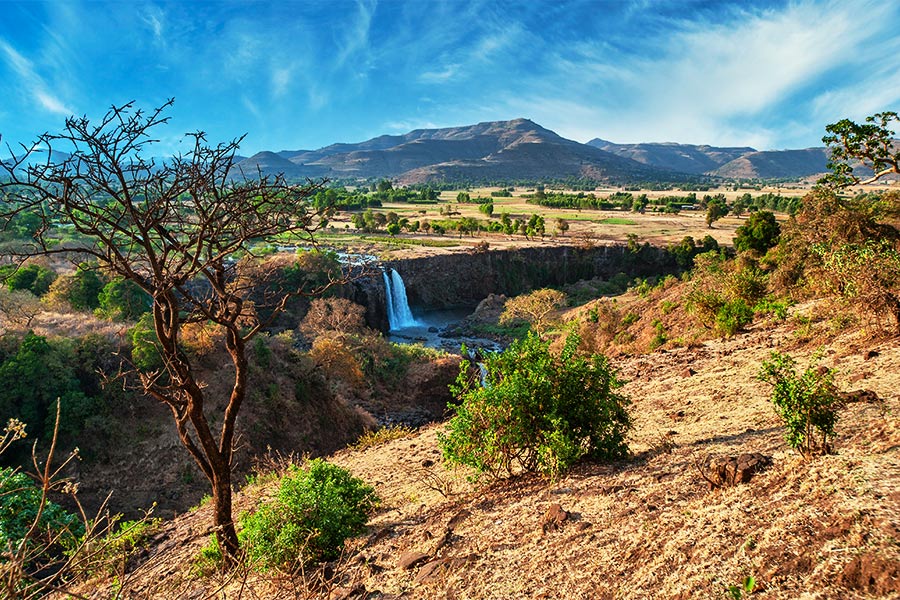 Known locally by the Amharic name Tis Abay, meaning ‘great smoke’, this is considered one of the best waterfalls not only in Ethiopia, but across the whole of Africa. And with good reason. Despite only featuring a 42-metre drop, it can have a torrential 400-metre-wide flow during peak season between August and September, reverting back to just a trickle between January and March.

The spray thrown up by the crashing water (which inspired its nickname) feeds the unique ecosystem found at its sides, including endemic fauna.

Find Blue Nile Falls about an hour’s hike from Bahir Dar, crossing bucolic scenery and Ethiopia’s first stone bridge, built in 1626, as you go. Make sure to visit on a Sunday, when the nearby hydroelectric station isn’t running, so you can experience the falls as nature intended. 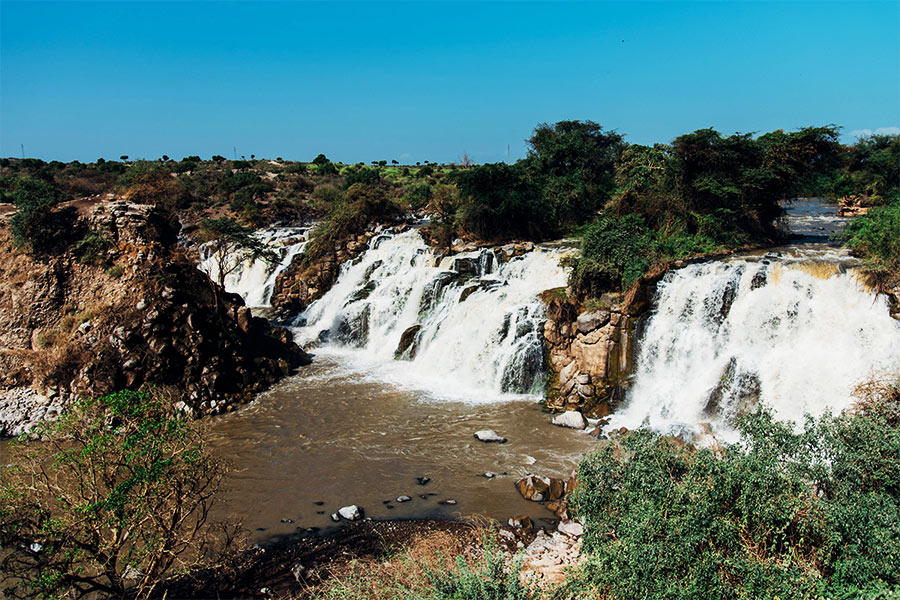 Alongside Fantale volcano and Filwoha hot springs, these falls over a 100-metre-wide and 50-metre-deep chasm are some of Awash National Park’s main attractions. You’ll find them in the south of the park, starting just below the rapids, before flowing and dropping quickly one after the other. As well as enjoying the views, take the plunge and voyage the 28km-stretch of the Awash River on a rafting trip. Those looking to spend a few days in the area should rest their head at the rustic Awash Falls Lodge, which sits just above the falls themselves. 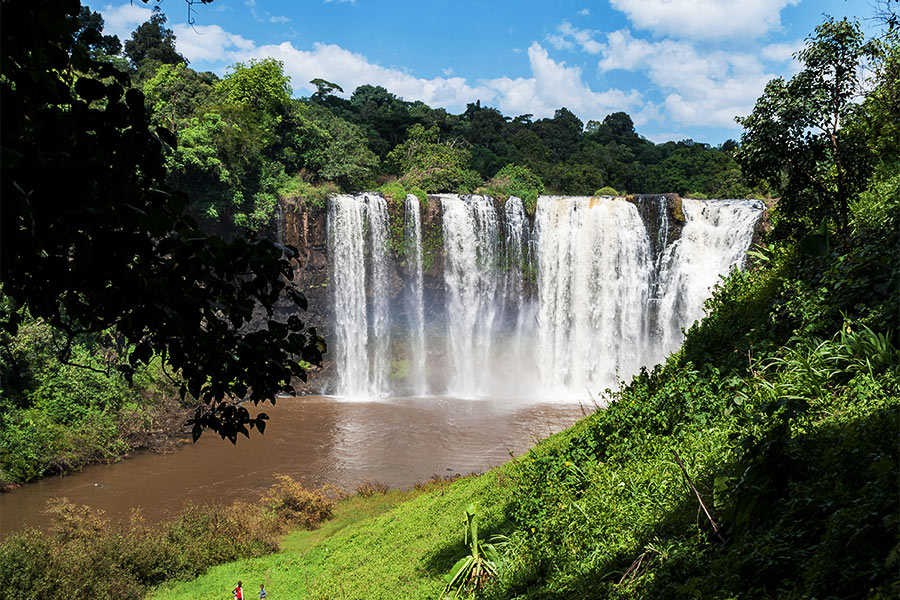 Sor River Waterfalls: well worth the trek to get there / Image: Alamy

These magnificent falls in the west of the country rival the power, size and beauty of the better-known Blue Nile Falls. They take a bit more effort to get to, however. Starting in the village of Bechu, 13km from Metu, you’ll need to walk a 5km trail before taking on the challenging ascent up to the waterfalls. Along the way, you’ll be treated to sightings of incredible local wildlife, from monkeys to birds.

The Sor River Waterfalls are an estimated 20-metres-high, but it’s their width and positioning that make them so astonishing. The falls drop at a near 90-degree angle into a flat pool at their base, while vibrant green forest lines the riverbanks. 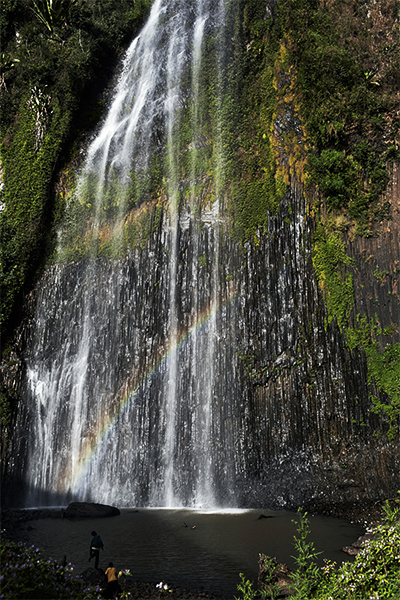 Bonus points if you spot a rainbow when you visit Barta / Image: Alamy

If you’re visiting the birthplace of coffee, Kaffa, in southwestern Ethiopia, go with the flow and combine it with a visit to Barta Waterfall. It’s a 30 to 40-minute walk from the town of Bonga, on a trail that passes verdant scenery, eucalyptus trees and wildlife (including monkeys). You’ll hear the rush of the waterfall before you see it, gushing some 70 metres down the fern-strewn rock face. If one waterfall just isn’t enough, there are 13 others dotted throughout the forest reserve. Then head back to town for a nice cup of joe.